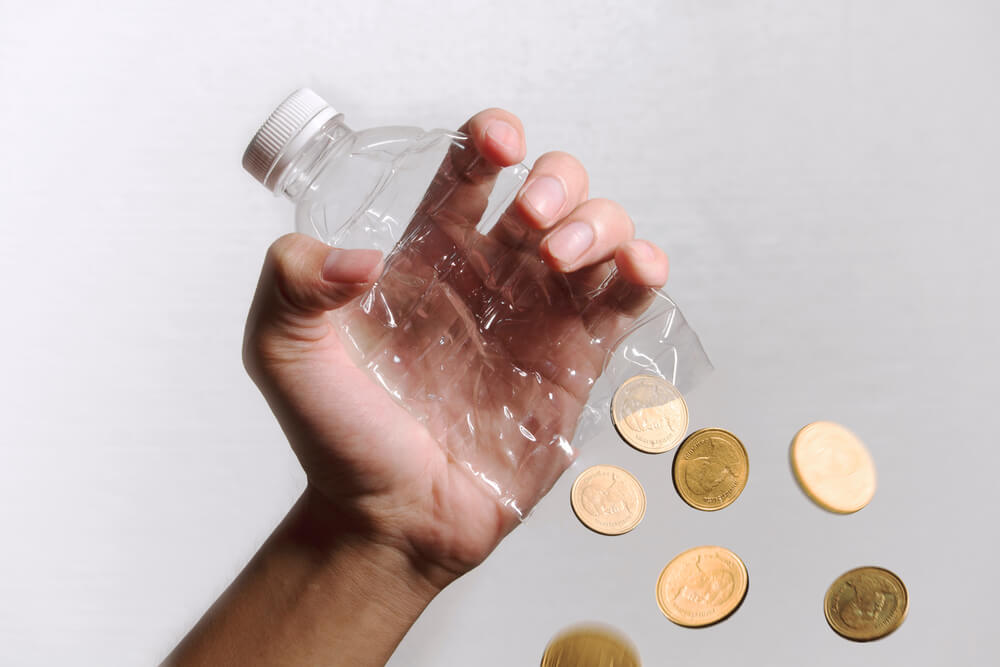 Plastic production has experienced an epic surge in the last half-century, resulting in extreme use of cheap single-use, throwaway plastic bottles that are threatening every aspect of our ecosystem.

Astounding images of city-sized islands of trash, beaches jam-packed with plastic waste, and dead marine life with guts full of plastic materials have ignited outrage. It’s no wonder plastic pollution has, over the last decade, become a hot-button issue for leaders from both aisles.

However you look at it, the world is addicted to single-use plastic bottles, and our planet is literally drowning in them. As of 2019, we purchase around 1.3 billion plastic bottles every day, which is quite staggering, to say the least.

If you were to pile those bottles one layer after another, they’ll form a pyramid half the size of Paris’ Eiffel Tower.

While single-use plastic water bottles are sometimes convenient and maybe tastier than tap water in some cities, they generally do more harm than good, especially to the environment, your wallet, and perhaps your health.

That’s why more and more people across the world are shying away from single-use plastic bottles in favor of reusable ones. In part, that’s thanks to recent findings by scientists that seem to suggest that we have around a decade to make a turn-around on the way we treat our planet before it’s too late.

The big question, however, is: do ditching single-use plastic bottles have any financial incentives for you? Put otherwise, how much money can you save when you switch from single-use bottles?

Keep reading to find out how shifting from the usage of single-use plastic bottles can be a huge money-saver both in the short-term and the long run.

It’s been long known that most Americans spend a significant amount of money on bottled water every year. The conservative figure as always stood at around $5 per week per person, which averages out to $200 each year.

However, a recent study from Penn State University has blown that number out of the park, showing that Americans spend much more money on single-use plastic water bottles than earlier thought.

In particular, the study revealed that the average person in the US could save approximately $1,236 every year if they ditched single-use throwaway plastic bottles for reusable water bottles.

One of the biggest reasons why everyone should own a stainless steel water bottle is that it can last an average of 12 years before you need to replace it. The minimum life expectancy of a reusable plastic water bottle is pegged at just five years, which is less than half of that.

If you do crunch the numbers, you can expect to save a whopping $14,830 in twelve years if you ditch your plastic water bottle for a reusable stainless steel bottle. What’s more surprising is that most of these stainless steel models like Kool8 cost less than $40, and are available in various styles, colors, and sizes to suit every personal preference, taste, and budget.

In the case of using a reusable plastic bottle, which usually retails at around $20 apiece, you could save upwards of $6,180 in five years (which is when you expect to replace your bottle, anyway).

That’s quite impressive, all the more so that it accounts for just one person. If you had a household of five, for instance, and all 5 of you use $40 reusable stainless steel bottles. That’s an investment of around $200 for your entire family.

Now consider that each member of your household can save an average of $14,830 in 12 years. Long story short, your entire household of five with reusable water bottles can save $74,160 (US dollars) after 12 years.

Think about what could do with that kind of money – perhaps you can set up a sizable college fund. Or maybe buy a brand-new 2021 Audi A6!

2. Plastic bottled water is 2000x as expensive as tap water. And that cost keeps going up year-in-year-out.

Drinking enough water has numerous tried-and-true benefits for your health and overall sense of well-being. There’s no question about that.

However, thanks to the fashion shows and run-way events of the early and mid-1980s, billions of plastic bottles of water are sold every year on the promise that that’s good for the skin and hair, safer than tap water, and healthier than sugary soft drinks.

Over the years, Americans have also bought into the idea that they need water within reach wherever they go. Little wonder people in the United States bought $11.8 billion worth of plastic bottled water in 2012, marking an uptick of close to seven percent from the previous year.

In fact, since the tracking of the dollar spending on bottled water began back in the early 1990s, its consumption has gone up by more than 300 percent and sales have spiked by well over 370 percent.

The only year that Americans reduced consumption of bottled water was during the 2008/2009 recession, but it came back strong to reach a record high within three years. And, although more and more people are embracing reusable water bottles, there’s no tangible sign that the bottled water craze will be bucked anytime soon.

However, the real issue, and the most interesting part, is the cost of bottled water to the consumer.

According to a report from Business Insider, the average cost of bottled water in the US is $1.22 a gallon, meaning that you’re spending as much as 300x on the cost of tap water in major cities.

In the year of reference, the entire bottled water industry raked in a staggering $11.8 billion in gross revenues by selling a total of 9.7 billion gallons of water. That averages out to roughly $6 per five gallons of bottled water. And, by the same token, that means bottled water costs three hundred times as much as tap water in areas like Houston.

You must also consider the fact that nearly 2/3rds of all bottled water are sold in 16.9-oz single-use plastic bottles, which drives up the cost to around $7.50 a gallon.

By taking a closer look at these numbers, you will soon realize why more and more Americans now prefer to use reusable stainless steel bottles over plastic bottled water.

3. Disposable plastic bottles cost you, your city, and everyone else when they end up in landfills

An estimated $11.4 billion worth of recyclable consumer packing, most of which are single-use disposable plastic bottles, end up in our landfills every year rather than being put through recycling. Even more starling, 80% of landfill trash in the US is actually recyclable, with the majority of the rest being plastics.

When you remove single-use plastics from the equation, you’re empowering cities and local governments to recycle more trash. And, according to the Environmental Protection Agency, increased recycling of waste leads to more services & goods, more sales, and more wages, all of which impact our economy positively.

As a whole, the recycling industry adds more than 85K jobs to the US market, and it pays well over $4 billion in wages, taxes, and salaries. It’s a win-win.

4. Ditching single-use plastic water bottles can save you lots of money in health cost savings

Using reusable water bottles instead of single-use plastics can make a huge difference when it comes to protecting your health and improving your well-being.

A growing body of research has repeatedly shown that single-use plastic bottles may leach a sizeable amount of a long list of harmful compounds that include Bisphenol-A (BPA), styrene, DiNP (Diisononyl phthalate), antimony, and some phthalates.

If these unsafe levels of these toxic substances make their way into your bloodstream, they can have adverse effects on your health. Let’s take a look at the elephant in the room, BPA, for example. As with most synthetic diphenyl methanes, BPA can be hazardous to your body at levels as low as 2.5 micrograms per kilogram of your body weight.

Studies have linked BPA to an increased risk for thyroid disease, premature deliveries, cardiovascular disease, type 2 diabetes, obesity, liver disease, and reproductive problems. Needless to say, all of the health complications will cost you big bucks in doctor’s office visits and hospitalizations.

In one particular study from Consumer Reports, investigators found that bottled water sold by some leading brands may contain unsafe levels of arsenic. This is another metallic chemical that you should be worried about when consuming water from single-use plastic bottles.

Long-term intake of arsenic via drinking water can lead to skin lesions and various cancers of the skin, lungs, and other internal organs. Exposure to the element has also been linked to increased risk for diabetes, cognitive disorders, and heart disease. On the other hand, a reusable water bottle can be godsent for your fitness and health, which can help you save more money on insurance premiums. Stainless steel water bottles, for instance, can help you drink more water and fluids like tea or coffee.

Your cart is empty.

There are no products in your shopping cart.