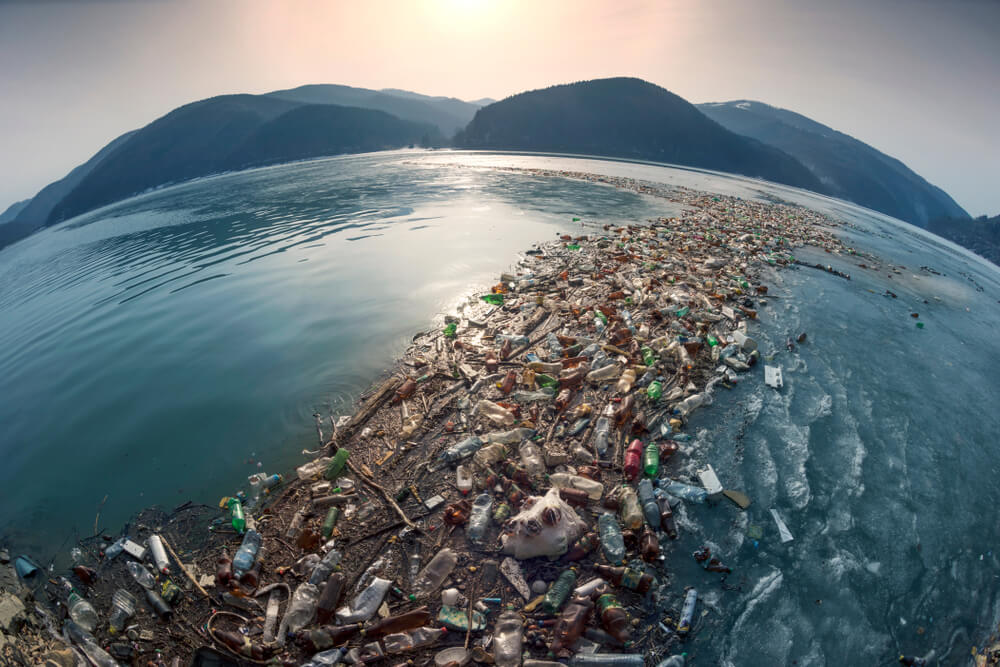 If you thought environmental activists were crying wolf when they sound alarm about the urgent need to reduce or ditch plastic use altogether, wait until you learn about the mother of all ocean pollution: the Great Pacific Garbage Patch. It’s not a political hot potato, but an obvious ticking time bomb.

Read on to find out more about this trash monster threatening the health and very existence of our beloved ocean. Look ahead for easy things you can do to play your part in curbing our perpetual appetite for plastics.

What exactly is the Great Pacific Garbage Patch?

Also known as the Pacific Trash Vortex, The Great Pacific Garbage Patch is the world’s most famous and the largest floating trash patch located in a massive expanse (coordinates: approximately from 35°N to 42°N and 135°W to 155°W) in the central North Pacific Ocean. It’s essentially a collection of monstrous trash islands composed primarily of gyrating marine debris particles.

Yachtsman Charles Moore first discovered the giant garbage patch back in 1997, when he stumbled upon an assortment of floating plastic, trash, and other debris while sailing towards his LA home. However, the name was coined by Curtis Ebbesmeyer, a world-renowned Seattle-based oceanographer best-known for his proficiency in monitoring ocean currents and tracking down freight cargo lost at sea.

Geographically, the Great Pacific Garbage Patch sits somewhere between California and Hawaii, covering an area believed to be much larger than the state of Texas. Be that as it may, the patch itself can’t be seen by boaters, divers, or even detected from space using satellite images. The reason behind this is that the floating patch is made up of low-density plastic debris.

These minuscule plastic particles occupy the upper column of water and are barely the size of a fingernail, which is why they’re often referred to as micro-plastics. Current movements and shape of the floating garbage islands seem to suggest that the trash came mostly from South America, North America, Asia, and other regions that make up the so-called Pacific Rim.

Far from being less significant than the overwhelming size of the garbage patch, new research shows that it’s actually accumulating at a more rapid pace than earlier thought. In fact, oceanographers and scholars believe that the patch has been mushrooming tenfold every decade since 1945.

As you might suspect, it’s not the only gyre of floating plastic and trash in the world. There’s also a similar collection of plastic debris emerging in the Atlantic Ocean, unsurprisingly dubbed the North Atlantic Garbage Patch, further exacerbating plastic damage to marine species, ecosystems, and economies.

The good news is that the Great Pacific Garbage Patch has over the years been the target of Ocean Cleanup, a non-profit organization founded and headed by Boyan Slat, then a Dutch teenager (now a 26-years-old entrepreneur and inventor). The organization has put up a $32 million clean-up campaign targeted at the patch.

How Big is the Great Pacific Garbage Patch?

The actual size of the Great Pacific Garbage Patch is not definite, as is the exact distribution of the gyre because it rarely has large trash, plastics, or other debris.

The trash islands are typically composed of microplastics and tiny trash particles that spin just below the water surface, so they may not be detected by satellite imagery and aircraft. Because of this, scientists often use sampling to determine the approximate size of the trash patch.

It’s important to note that these size estimates are purely speculative and subject to a big margin of error considering the intricacies of sample testing. Moreover, whereas the patch size is usually estimated based on the above-average level of marine debris, there’s actually no standardized measure of what’s “normal” or “higher” concentration of microplastics to help demarcate the area affected.

The region in and around the heart of the trash patch is somewhat stable and relatively calm. That’s why it comes as no big surprise that some of the microplastics in this area are more than half-century-old and include bits of plastic bags, cell phones, nursing bottles, pens, bottle caps, plastic bottles, toothbrushes, cigarette lighter, and whatnot.

Where Does All the Trash Come From?

The gigantic patch of trash and plastic floating in the Pacific Ocean is now common knowledge, but how, why, and where did it all come from? First things first, it’s super important to understand what a gyre is and how it works.

According to NOAA (THE National Oceanic and Atmospheric Administration), a gyre is a vast body of spinning ocean currents. In recent times, however, the term has been used to refer to the trash vortex (which consists primarily of debris of plastic particles) spinning in the ocean currents.

Incidentally, the area in the eye of the gyre usually is stable and extremely calm, meaning all the trash carried by the four currents almost always ends up parked around the center.

For example, a plastic bottle thrown into the ocean on the coast of Japan is picked up by the Kuroshio Current and drifted eastward towards the trash patch.

That makes it easy to trace an approximate source of most trash and plastic debris that end up in the patch. In fact, one 2015 Science study was designed to help find out where exactly all this trash is originating from.

According to the study, the disposal of plastic and other debris often moves eastward out of most Asian countries, most notably Thailand, Sri Lanka, Vietnam, the Philippines, Indonesia, and China. Get this: only five countries in Asia – namely Vietnam, Thailand, Philippines, Indonesia, and China – pollute the ocean with plastic with all other countries put together. In fact, 30 percent of the global plastic ocean pollution can be traced to China alone.

Talking about the source of debris and trash in the Pacific trash vortex; land-based activities, primarily in Asia and North America, are responsible for around 80% of it, while large cargo ships, offshore oil rigs, and boaters are responsible for the remaining 20%.

What is in the Great Pacific Garbage Patch?

The trash patch developed slowly yet steadily over the years as the four ocean currents (gyres) collected ocean pollution that ended up being trapped in these garbage islands. As far as the composition of the plastic trash goes, about 94% is microplastics which number approximately 1.8 trillion, most of which results from discarded plastic bottles. Funny enough, microplastics only make up 8% of the total plastic waste in the patch.

New research shows that the plastic composition of the trash patch weighs around 79,000 metric tons, meaning it’s 4-16x larger than earlier thought. But, as it turns out, 46 percent of the total plastic tonnage comes from discarded fishing gear, including nets, lines, ropes, baskets, crates, eel traps, oyster spaces, floaters, and so on.

Researchers believe that as much as 20% of the plastic debris in the Great Pacific Garbage Patch is from the Tsunami that hit Japan in 2011.

What Are the Effects of the Trash Patch?

Microplastics and other debris affect the entire ocean ecosystem. And, if we don’t change our ways that lead to plastic ocean pollution, marine debris will weigh more than fish by the year 2050, according to predictions by the United Nations Ocean Conference.

Ocean plastics disrupt marine life in so many ways, including choking off their habits. For instance, Albatrosses often mistake resin pellets made up of plastics for fish eggs and feast on them — even worse, they feed these plastic balls to their chicks, which ultimately die from organ rupture and starvation.

Loggerhead sea turtles, on the other hand, usually mistake floating or suspended plastic bags for their favorite prey, jellyfish.

Worse still, ghost nets (a fancy term for abandoned or discarded fishing nets) drift with ocean currents and entangle turtles, seals, sharks, and whales. Did you know that around 100,000 marine animals are either injured, suffocated, or strangled by plastics each year?

Many studies have repeatedly found microplastics and plastic debris in the gut contents of nearly all marine animal species. The most affected animals are whales, albatross, sea turtles, and several species of seabirds.

Microplastics may also be suspended along with plasticizers, heavy metals, and organic pollutants, most of which lead to digestive problems, reproductive issues, abnormal growth, and hormonal disruption.

The vast majority of microplastics and other plastic pollutants end up in the human body through eating seafood, causing a devastating array of health complications. BPA, for instance, has been linked to a variety of cancers, reproductive problems, and unwanted mutations.

It’s scary to think that our oceans will be jam-packed with more plastics by weight than fish by 2050. However, given the remote location of the patch in the high seas, no country will fund the cleanup or even take responsibility.

Even if Ocean Cleanup or other forward-thinking organizations could come up with specialized nets that would just trap trash, the almost infinitesimal size of our oceans will make this task far too expensive and time-consuming to be feasible.

That being said, the heavy burden now rests upon each and every one of us to do our part by seizing the chances to stop the problem at the very source and prevent an impending ocean trash apocalypse.

Thankfully, there’s something you can do to stop using so much plastic.

Good thing, refillable water bottles come in a variety of non-plastic materials that include stainless steel and glass. These are usually eco-friendly, easy to refill, and built to last up to 12 or more years.

Take Kool8, the most talked-about stainless steel water bottle, for instance. Double-wall insulated, stunningly gorgeous, and made with industrial-strength stainless steel, this beauty can keep your favorite drinks — whether they be water, iced macchiato, coffee, or tea — cold or hot for 12+ hours.

Some reusable bottles have built-in filters, so you won’t have to worry about water quality and taste. Besides, filter-fitted water filling stations have popped up almost everywhere in the country.

Pass up plastic bags. More than 100 billion plastic bags are used every year in the US alone and some end up in the ocean. Simply take your own reusable shopping bag the next time you shop for groceries, suppliers, etc.

Recycle, recycle, recycle. You’d be surprised how low the rate of recycling is in rich nations. In the US, for instance, only 9 percent of plastics go through recycling. Do your part: recycle whenever you can.

Oceanographers, scientists, and environmentalists all agree that reducing or stopping the use of single-use, throwaway plastics is the best way to slow down or clean up the Great Pacific Garbage Patch.

On your part, ditching bottled plastic water for reusable water bottles is one of the best ways you can do so. Don’t forget to support, volunteer, or donate to organizations actively working to ban or reduce the use of plastics.

Your cart is empty.

There are no products in your shopping cart.